The Communications Section at the Federal Chancellery coordinates Federal Council communication with the media, public, cantons and Parliament.

Before federal votes or referendums are held, the Communications Section produces a brochure explaining the proposals being put to the vote. Written in close collaboration with the departments, this brochure is sent out by post to around five million people. Since 2016, the Section has also produced an explanatory video on each proposal. These clips complement the explanatory pamphlet and the information on admin.ch.

Along with the cantons, the Communications Section runs ch.ch, a public portal in five languages which answers all kinds of questions relating to the authorities and democracy.

The Section organises communication relating to all aspects of the Federal Chancellery’s work. It responds to media requests, establishes rules on language and style, provides support to the Federal Chancellor when he makes public appearances and replies to questions from the public. The Section also runs the media centre and is responsible for accrediting journalists.

The Federal Authorities of the Swiss Confederation 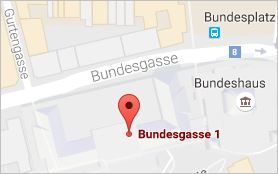